About 60 participants from eight different countries - among them experts as well as students – joined the annual conference of the Innovation Circle Network that recently took place in Riga – Europe’s Capital of Culture.

Small town developments, citizen dialogue, sustainable, multimodal and green transport corridors and the Interreg Baltic Sea Region Programme 2014 - 2020 were just some of the issues that had been discussed during this two-day conference that marks the annual highlight for the IC Network.

„The purpose of ICN is to find friends and partners“, pointed Siv Jacobsen, deputy chairwoman of the ICN board, out when she opened the 7th annual meeting of the network and handed over to Steinar Egil Hagen, Norwegian ambassador to Latvia who found time during his busy start in Latvia to speak at the this ICN event. “This is my 7th week as an ambassador and so far I have managed to visit several regions”, explained Steinar Egil Hagen and recommended the audience to not only see the capital Rga but to get out in the regions. An advice that fell on sympathetic ears since that is exactly what the network members demand. Besides a lot of new impressions, interesting approaches and new ideas Steinar Egil Hagen learned in his first weeks as ambassador to Latvia that, "obviously it is easy for the people in the Baltics to learn our language but it is almost impossible for us to learn their languages.” Nevertheless, during the discussions and presentations of the conference there were no language barriers in the way. To the contrary, the audience spoke one language since they all aim for the same: the prosperous future of the Baltic Sea Region. Bjoern Frode Moen, UNESCO World Heritage coordinator from Notodden in Norway focussed in his presentation on the question if there is a chance to connect European regions through cultural heritage? „Develop an appropriate knowledge base. Mobilise people and resources around the strategic challenges. Build bridges between levels and policies“, were just some of the recommendations he had for the audience. Karine Petersone, Director oft he Latvian Institute impressed the participants with a long list with of impressive benchmarks of Latvia: “ We are the number one country in woman in leading positions in business. (…)We have the fourth fastest Internet rate. (…) Latvia is the country with the longest beach in Europe. (…) We are proud of our heritage – and we have turned all foreign powers into pride.” Whether we talk about education, medicine, design, science or arts – Karine Petersone made clear that her country is on the upgrade. And that is exactly the way that the network is aiming at for the whole Baltic Sea Region. New project ideas to turn ideas and plans into actions had been discussed in Riga, too. While there was a strong focus on Transport development - Wiktor Szydarowski's presentation about sustainable, multimodal and green transport corridors prompted some profound debates - participants also talked about rural tourism, biogas, food and green technology project ideas. "What ever we do and where we do it – the place must be attractive", said Gunta Lukstina from Latvian Association of Local and Regional Governments and demanded to involve local regions in the BSR strategy. ICN members are ready to take the next steps - concrete results should be submitted in the beginning of the new year. 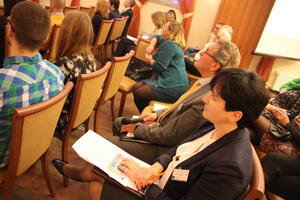