EU welcomes Croatia as new member of the Union

From 1st of July Croatia is a member of the European Union. The Balkan state is the 28th country to join the EU. While some are celebrating the growth of the union and celebrate the accession as a triumph for the European project others are more sceptical.

The reactions towards the new the EU accession of Croatia is quite divers as a short overlook of the European press landscape shows. „Another problem child" headlined the „Neue Züricher Zeitung“ (NZZ). „A deep red state budget, an inefficient bureaucracy and a corporate sector that has rarely exported and is little competitive on an international level: Croatia as the 28th member state is only of little help to strengthen the economically troubled EU“, writes Thomas Fuster in his recently published NZZ-article.

The German TAZ journalist Erich Rathfelder attributes the accession a historic dimension and doubts that a secret service affair that happened 30 years ago could be a plausible reason for the refusal of the German chancellor. German media discusses these days why Angela Merkel cancelled her participation in the official welcoming celebrations while the French "Le Monde" feels little "europhoric" about Croatia accession.

On the other side of the Atlantic Ocean the growth of the Union has also been discussed. New York Times journalist Alan Riley wrote on 28th of June: “An authoritarian country riven by conflict, where war criminals once operated with impunity, has been transformed. Despite the euro crisis, the Union’s “magnet effect” is still widely regarded as having the capacity to change wayward nations into states that follow liberal European norms.“

So everybody is talking about it but what do the Croatians think about their new status? The Croatian daily newspaper "Novi List" from Rijeka looks forward to the historic event with excitement and wonders, in what way the ordinary citizens will benefit from the accession to he EU. “No one really knows. There are only a few days left and we wonder what is really going to change. How it will affect our daily lives, the cost of living, the job market, traveling, etc.? No one has a clear idea [...] It is neither all good nor all bad. Only one thing is certain: It will not be easy.”

"Vecernji List" from Zagreb highlights the question of the importance of Croatia's EU accession rather from the other side: “What does Europe mean for Croatia, is the eternal rhetorical question ... but the accession to the EU still represents a much more important question: What do we bring to the EU? On what do we base our identity and uniqueness, what are our short-term and especially our long-term national goals? [It] seems like one is only celebrating Europe with the completion of accession talks, instead of thinking about Europe.”

To think more about Europe might indeed be a wise idea. A warm welcome to Croatia! 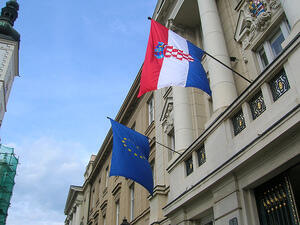