Europeans on the move!

Conference is coming up 1-2 December in Riga

Europe is no longer the single leading continent. Innovations within the transport sector in Asia are amazing and also at other continents we see heavy investments in new inftarstructure. Hyperloop, Maglev, High speed trains, autonome electric cars. The list is longer. Entrepreneurship all over the place. China has launched the "One Belt One Road" vision for the Eurasian continent, the "New Silk Road". EU has launched the TEN-T concept. Core corridors and nodes are pointed out and massive investments are made and expected to be implemented during the next decades.

The regions of Europe will win or loose partly because they are connected or not. Cities and towns will prosper or shrink. Connectivity and accessibility are the key issues. Demographic changes are severe in the Baltic states and within East- and Central-Europe. Lithuania has the fastest declining population in Europe. but also Estonia, Latvia. Germany and Poland have faced signifcant outmigration and low fertility rate during the last decades. Moreover some of the regions within Germany have experienced dramatic decline in polulation. Some towns in Brandenburg had a 30-50% decline since the reunification of the whole Germany. Probably will the massive immigration to Germany last year not change thsi pattern. Sweden, Norway and UK have on the other hand among the fastest growing populations in Europe. This is heavily caused by immigration. Partly because of rather high fertility which again is caused by politics for families and children.

There are many good reasons to gather people in Riga 1-2 December. The 9th annual conference will be a place for learning about European development and sharing views, picking up new ideas, project initiatives and connecting to other partners.

This year the conference is organized in cooperation with Vidzeme Planning Region and the TENTACLE project which is a Baltic Sea Region flagship project. Blekinge Region is the Lead Partner.

Download the whole program and register here before 1th November.

The conference venue is at Hotel Roma in central Riga. There is no participation fee. 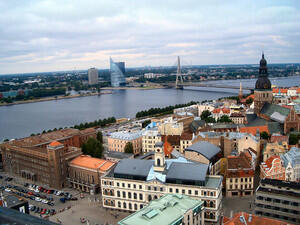