After a devastating earthquake and a tsunami hit Japan on Friday, 11th March, EU Energy Commissioner Guenther Oettinger called a meeting to discuss nuclear safety. On Tuesday energy ministers, power companies and regulators will get together in an emergency meeting in Brussels.

A record 8.9-magnitude temblor caused considerable damage to the country's eastern coastline and seriously damaged a reactor at Fukushima plant in Japan last Friday. After an explosion fears of a nuclear catastrophe raised. To avoid a calamitous release of radiation three reactors at Fukushima plant were flushed with water as the station’s cooling systems failed. It was the strongest earthquake ever recorded in Japan, which.

To assess the Japanese situation and EU’s state of preparedness in case of similar incidents, Commissioner Günther Oettinger has called a coordination meeting tomorrow, Tuesday 15th March in Brussels, with EU Energy Ministers, all 27 national nuclear safety authorities and all operators and vendors of nuclear power plants in the EU. The aim is to get first hand information on contingency plans and safety measures in place. This includes information on the controls done by national authorities, the safety requirements for earthquakes and emergency power supply systems for reactor cooling. Commissioner Oettinger will give first hand information to the European Parliament at the ITRE committee on Tuesday evening after the coordination meeting.

Foto: A damaged water pipe shoots into the air after a tsunami triggered by a 8.9 magnitude earthquake off the Northeastern coast of Japan. 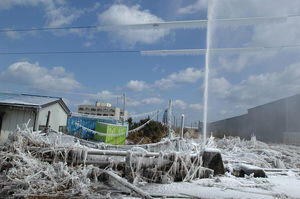