Do you feel European?

“Bringing economy, solidarity and democracy together”, that was the demanding slogan of this year’s Civil Society Day that took place at the Brussels office of the European Economic and Social Committee (EESC) this week.

The Civil Society Day was the fourth of its kind and this year coincided with the European Year of Citizens. The byline for 2013 - As European as we can get! - seeked to examine Europeans’ rights, the enforcement of these rights and what role they play on both a local and European level. Participants explored how the economic, social and civic dimensions of EU citizenship can be mutually reinforcing and meet the public's expectations in a way that reflects the values and goals of the European project.
The Civil Society Day has addressed key issues of active and participatory citizenship against the backdrop of a major financial, economic and social crisis that is in essence undermining democratic processes and challenging the very legitimacy of institutions and public policy at both national and European level. The aim of the event was also to reflect the great variety of forms of expression and commitment across Europe that demonstrates the true meaning of European citizenship.

Still some way to go for citizens to become engaged in European public debates
While Europe faces economic and social challenges, EU citizens continue to involve themselves in participatory democracy activities, including signing petitions and becoming active members of non-governmental organisations, mainly at local and national level. A Flash Eurobarometer measuring citizens’ engagement shows that Europeans trust civil society organisations to influence policies and make a difference in the life of their communities. Eurobarometer is a report that examines the extent to which European citizens engage in participatory democracy, and the extent to which they believe that political decision-making can be influenced through their own actions and through those of civil society organizations.

European leaders can no longer rely solely on elected politicians to pass on messages from their citizens. They also need civil society to ensure that their policies are more firmly rooted in citizens’ concerns, and to make their decisions more legitimate. Civil society represents millions of Europeans in all walks of life. The crisis has been further strengthening its role, both as a mouthpiece for voicing discontent, and also in providing an extra pair of hands, to act where help is needed and where budget cut-backs have reduced the welfare state to a minimum.

The Civil Society Day is an opportunity to consider the place and the role of organised civil society within a more participatory democratic set-up and what it can do to help build a European Union in which people can take a more active part in shaping EU policies. For more information please visit the Civil Society Day page of the EESC website. 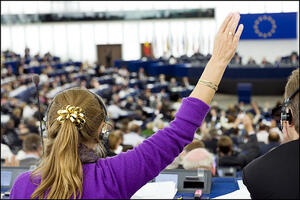