The movie Disgrace is based on a prize-winning novel by J.M.Coetzee. It is set in post-apartheid South Africa, but a South Africa that is split into very different urban and rural worlds. The two are connected by 52-year old David Lurie (played by John Malkovich), a white professor teaching classes at university in Cape Town about 19th century British Romantic poets. He abuses his authority by obliging a female student to have an affair with him. She is Cape Coloured, and her black boyfriend and her family take action in different ways against him.

Lurie is forced to resign and makes the long journey into the Eastern Cape, a poverty landscape of scrubby rural uplands, where his daughter Lucy (Jessica Haines) lives. Her female partner has recently returned to Johannesburg, so she is alone in the fierce sun and dark nights, except for her dogs and Petrus, the black handyman who helps her about the house and lives in a shack just a few metres away. She makes a living selling garden produce in the local market. One day when they return from the market, David and Lucy are attacked by three black youths: he is beaten and set on fire, she is raped. As the story unfolds it becomes clear that the boys are linked to Petrus, who meanwhile is laying pipes and building houses on the land that he has used a government grant to acquire. David returns to Cape Town to finally say “sorry” to the family of his student. Lucy is pregnant and decides to keep the child and stay under the protection of Petrus, a solution that David finally comes to accept.

This short summary does not do justice to the complexity of the film and its intertwined themes of gender relations, family relations, ethnic relations and relations between people and animals. All these strands are connected by power and space. Under apartheid, state power was used to divide space on ethnic lines. However the film illustrates a multiplicity of space-power relations. David commands the space of the lecture room, strolling easily before his now multi-racial audience reading from the poetry of Byron and posing questions to his audience. He then asks the student who he is lusting for to come into his room (incidentally I have never seen an academic’s room so tidy!). This is a space he controls by closing the door on the bustle of the corridor. He wines and dines his reluctant lover in a restaurant where the tossing waves of the Atlantic are framed for patrons’ enjoyment through magnificent picture windows.  However, when he is brought before a university tribunal to answer the charges of misconduct, the camera looks down on him and he is an isolated, outcast figure, made to walk across a large room to sit in his lonely chair facing the panel.

Eventually he will make the journey back to Cape Town, to visit the home of the girl’s family behind its security fence and gates. There, in their space (which the man of the house controls) David at last must kneel and apologise for his actions, in a way that echoes “Truth and Reconciliation”, the theme that took South Africa to become the “Rainbow Nation”. However in the private space of his car, and as a man with money, he can still avail himself of the sensual pleasures of the city offered by a prostitute.

The space in the rural Eastern Cape is very different. At first Lucy’s house stands alone at the end of a dusty road in a harsh, rocky landscape. She rejects the fences and razor wire that others see as essential survival measures. She makes beautiful flowers grow in the scratched ground in front of her house, near the cages where she keeps her dogs. However, by the end of the film, Petrus has the land around the site staked out with fences. He has cemented breeze-blocks together and put in water pipes to make houses that, while basic, are a great advance on the shed he previously occupied. Several of these house are being added on plots within his new territory. In contrast, during the attack on the house, David was imprisoned in the tiny bathroom. His high European culture (he is writing an opera about Byron in Italy) is on barren ground here. A traditional culture shapes daily life – patriarchical again but with obligations to the extended family, an unsentimental attitude to animals, the felling of trees to make the land subservient to human aspirations. Even eating is different out here: Lucy grows and sells vegetables; David is served freshly slaughtered lamb at the house-warming celebration staged by Petrus. However, TV now connects this remote area to game shows and football matches.

Throughout the film, space is contested and negotiated. It is still mainly controlled by men, though not just by white men. In opting to stay in the Eastern Cape Lucy recognises that she can only do so by accommodating Petrus’ demands on the land that was hers. She is willing to reach agreement, but not without setting some conditions, keeping the house itself as her own space.  In the closing sequence, David parks his car on the highway, and again we see him from above, in a wide shot as he walks alone through the scrub and up the gravel road to Lucy’s house: he too has come to terms with his situation.

So what has an Australian movie that is firmly rooted in South Africa got to do with the work of the Innovation Circle here in the north of Europe? In particular, as the Trans-in-Form INTERREG project kicks off, with many IC partners involved, why write a blog about this film, rather than about the project? Here are a few reasons.

Firstly, the TiF partners are from peripheral, mainly rural regions, often a long way from the big city. In terms of the film, they are more Eastern Cape than Cape Town. Practices and cultures from a big city are not easy to plant here. Local and traditional culture is a powerful force, though not always a progressive one. Nor is that traditional culture static: it is being shaped by new economic opportunities and new governance structures.

Secondly, public space is central to TiF. The project aims to deliver three enhancement projects, and to alert all partners to the potential of redesigning spaces in and around towns. Disgrace prompts us to ask who controls these spaces, who is excluded from them, how and on what terms can a way of using the spaces be agreed? Who decides? Can ideas from the culture of a different continent, in TiF’s case the architecture of New Urbanism from the USA, flourish here? Should actions seek to subdue nature in order to make a living – or work with it to the same end?

Finally, and perhaps most fundamentally, Disgrace hints at the finely balanced hold that a place can exert on people. Lucy is encouraged to take a break and visit her mother in the Netherlands. She declines, because she knows that if she leaves she will never come back. Her child will call this place “home”. David also has made the long trek back to this new place that is far from the lecture rooms, manicured lawns, restaurants and bright lights of the big city. Petrus has a new relationship to the place, developing it in his own way. In contrast, Lucy’s ex-partner, who we never see in the film, did leave, returning to Johannesburg, the big city. 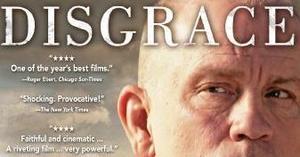