I was representing the Innovation Circle Network and had a role of a moderator at the conference. The workshop called Future Success – how to build a prosperous Baltic Sea Region was very much in common with what I do in IC and in my university too.

First, I asked my workshop participants what the prosperity is. Some thought it might be a general sense of well-being, economical wealth or strength. The definition of prosperity says it is “a successful, flourishing, or thriving condition, esp. in financial respects”. The fact is that it is very difficult to imagine prosperity without being rich. And I got this topic to talk about in the middle of global financial crisis.

Looking closer to the statistics (although they say according statistics 75% of statistics are made on spot) we could see that all the countries represented were experiencing some financial restrictions. As it would have been agreed, unemployment rate were rising in all countries with Latvia in the leading position reaching 16,7% unemployment. Lithuania and Estonia was coming in the second and the third positions while Norway was really bad at this race of getting a high unemployment. The participants decided Norway should try harder. 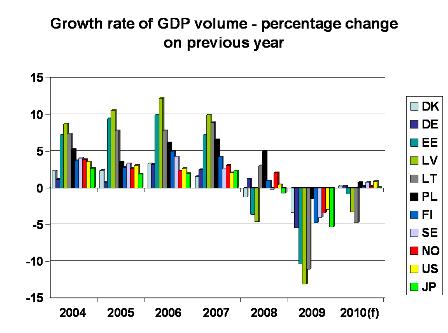 When looking at the GDP (Gross Domestic Product) indicator which is usually used to measure country’s economical growth, we saw that it had a negative increase in most of the countries in 2008 when the recession has started. The year of 2009 was a part reflecting crisis. A perfect comment illustrating the picture would be the words said by Latvian Prime Minister V. Dombrovskis: “Budget of 2009: hangover after rich years”.

However, when preparing the presentation I found an excellent question raised by the EU. Is the GDP the best way to measure success of a country if it does not include vitally important things such as clean environment, social cohesion or even how happy people are? Prosperity is not only about money. Shouldn‘t a civilized Europe have an indicator to measure happiness with something like Himalayan Kingdom of Buthan already has for many years? GNH – Gross National Hapiness including:

Is it something that cannot be measured? Or is it similar to the new IC project Trans-in-Form where we have an Attractivity Barometer looking at how much people eager to live in one or another place?

“Brussels wants greener, happier economic yardstick than GDP” says the EUobserver.com where they mention a lot of wonderful reasons for it. Have you thought that if cutting down all the forests of a country and export them as timber, would bring a great increase to your GDP? However, ask your self will it be useful for you, your country and environment in a long run. Hurricane Katrina caused over 100 billion US dollars in damage and took away 1’800 people’s lives, but the GDP was still increasing that year… 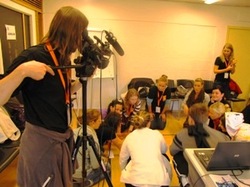 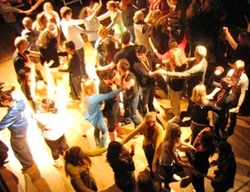 Lastly the workshop compared present countries with the world’s poorest (which you can do at www.gapminder.org) and asked what crisis really is? Is it something like not being able to afford another fifth pair of shoes this season, or is it about reconsidering our needs which often are our wishes so the economy and Social needs and Environment can go in one line? Is it about managing to find a balance between our real needs and recourses we have, so we do not compromise the ability of future generations to have their own needs?

Human creativity builds prosperity. And all those persons in the conference have gathered to be creative and act. Because, if people are not allowed to be useful they start to think they are useless. And that is something we cannot afford to have in out beautiful and perspective Baltic Sea Region.

I was delighted to see people younger than me (I am 23) standing up in front of the audience and trying to persuade other people to think sustainable. This is our future.

There were more workshops based on equal rights, intercultural regions, environment and creativity at the conference and even a lunch with politicians. Young people were asked to give some crazy ideas for developing the BSR. It was interesting to see that they are so smart to think about consequences and all the “impossible” before the crazy ideas come into the discussion. Anyway we have thought about adopting each BSR country to have a specific topic for high quality universities. E.g. specializes in economy, in planning, in medicine… this was suggested to avoid the system where all people go to to get the free education. There was also an idea to produce in BSR and by from BSR, to create a strong BSR market. And there were a lot more ideas which you will find in the Book of inspiration. The project Different History – Common Future has already produced a Book of Demands and Book of Possibilities which you can find on www.ubc-youth.org.