In 2010 the International Atomic Energy Agency (IAEA) listed 437 operating nuclear power plants in 30 countries worldwide. 188 power plants are currently operating to generate Europe’s energy demand, seven less than a week ago. The German government decided to shut down seven out of 17 power plants. The nuclear disaster in Japan has raised a new debate on nuclear power.

The Turkish Association of Dam Safety conducted a seismic risk analysis on 42 structures. According to the analyses five dams would potentially be unsafe during an earthquake. Important facts since Turkey is currently evaluating options for the construction of a nuclear power station.

In Paris dozen of demonstrators gathered to protest against France’s nuclear energy policy. With 58 nuclear power plants France is Europe’s most enthusiastic devotee of nuclear power. 75.2 percent of the country’s electricity is generated by nuclear energy. Worldwide, only the US has more plants, in total 104.

German and Austrian social democrats call for an EU-initiative for a nuclear phaseout. The petition needs to gather a million signatures from at least seven member states so that the EU Commission has to take a justified stance on the issue. Czech columnist Jan Macháčk says the mobilisation of German and Austrian politicians has been over-the-top and asked for more rational manners.

Nevertheless, the need for alternative energy sources is more evident than ever. Hopefully politicians will see and understand the signs – independent from lobbyist demands.

Foto: The nuclear power plant Biblis A is one out of seven German plants which have been shut down this week. 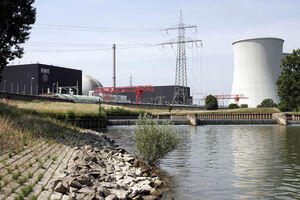