Today one of the newest members of the EU celebrates its national day. "Latvijas Republika", a small country on the Baltic Sea in northeastern Europe belongs to the EU since May 2004. 94 years ago, on 18 November 1918, Latvia was established as a separate state.

Until today Latvians remember that day with their national holiday "Proclamation of the Republic" party. Shortly after the founding of Latvia the country lost its independence and became a part of the Soviet Union. It was not until August 1991 - after the collapse of the Soviet Union – when Latvia became again an independent Latvian state.

In Latvia, one encounters many lakes, rivers and a colorful mix of forested hills and endless plains. With a bit of luck you can find Bernstein along the Latvian Coast, hence the name "Land of Amber". Perhaps the small country in the north is even the country of origin of the Christmas Trees: One assumes that the people in Latvia have set up the first Christmas tree in 1510. The national dish in Latvia is "un zirni spekis" - gray peas with bacon. Otherwise, people eat a lot of dark bread, preferably with milk and honey. Latvians love to sing and have a lot of folk songs. Some of them will be singing for sure today.

You don’t have to speak Latvian to understand the following short film, a count-up to 94, the age Latvia turns on November 18, 2012. This is more than a heart-warming initiative or a birthday greeting – it’s a testament to a strong foundation of this country 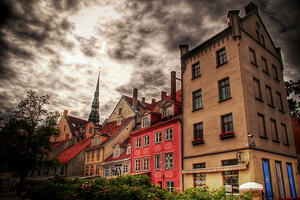