Climate change – the view from the Caribbean

How do other parts of the world view the climate change meeting in Copenhagen? We know that 15,000 or more politicians, diplomats, scientists and campaigners are in the capital of Denmark to try to reach an agreement. However, the media here in Europe gives us a European slant on the negotiations. I was in Trinidad last month at a major Commonwealth meeting. Climate change was high on the agenda, and the views of governments in the Caribbean were put over strongly. The question in Copenhagen is whether agreement can be reached on measures to deliver cuts in emissions that will keep the rise in temperatures below 2 degrees. In the Caribbean the call is for a more stringent target.

“If the world temperature rises by more than 1.5 degrees Centigrade, the Caribbean’s low-lying countries and small island states will be at serious risk of economic hardship, poor health, and environmental degradation from rising sea levels, severe weather, coastal erosion and coral and sea life deterioration”, says CARICOM, the Caribbean Community and Common Market, a body with 15 member states.

In July 2009 the CARICOM Heads of Government agreed the Liliendaal Declaration on Climate Change and Development, which set out their negotiating position for Copenhagen. Their stance is shared by other members of the Alliance of Small Island States from other regions in the globe. The starting point, of course, is that the Intergovernmental Panel on Climate Change is right in its warnings: the climate is getting warmer and this is a consequence of greenhouse gas emissions. On that basis, and mindful of the vulnerability of their countries, CARICOM calls for “adequate and predictable financing for adaptation as soon as possible”.

They also want more investment in research and development and transfer of technology for adaptation. In particular, they are looking for exemption from patent protection for adaptation and mitigation technologies. However, their most demanding call is for action on mitigation. They say that evidence that climate change is accelerating makes it necessary to deliver deeper cuts in emissions than had previously been called for. They want Copenhagen to reach an agreement at least in line with the 2007 IPPC report of 2007, backed by strong intermediary targets.

The CARICOM countries also point to the part that forests have to play in mitigation. Deforestation accounts for about 20% of all greenhouse gas emissions. The problem is that in some heavily forested countries such as Guyana, other land uses are more economically competitive than forests, resulting in felling and clearance. Last but not least, and in line with what the other G77 countries will argue in Denmark, they hold fast to two basic principles – historical responsibility and the polluter pays. This points the finger at Europe and North America.

The threat posed by a 500 millimetre rise in sea level is self-evident in any community where most of the population lives close to the coast and less than a few meters above sea level. Indeed some of the latest forecasts talk of a rise of a metre by the end of the century. As well as risks to property the rise threatens salination of agricultural land. However, warming will also increase sea surface temperatures. (After a brief paddle in the sea in Maracas Bay one balmy afternoon, I can confirm that the Caribbean already is much warmer than the North Sea, by the way!). This temperature rise impacts on the coral reefs which are such an important part of the marine ecology in this region. The increased frequency and severity of storms and hurricanes also damages the corals, and erodes the rocky platforms on which the corals grow. Thus the habitats of literally thousands of organisms are at stake. But so are the livelihoods of millions of people in the region. The beaches and coral reefs are vital to the fishing and tourist industries in this part of the world.

Developing countries are already experiencing high rates of urbanization, as exemplified by the case of Lagos that was discussed in last month’s blog. Climate change will accelerate this process. Wherever it becomes harder to make a living from agriculture or forestry, people will move, and they will mainly migrate to the urban areas which offer the hope of better job opportunities. The surge of slum-led urbanisation will be fuelled by these environmental refugees. Many will look beyond the shanty towns to the rich countries of Europe as their desired destination.

Rural areas on the periphery of Europe, are often already sparsely populated, and have an aging and declining population. Where will they fit in the new migration jigsaw? Though such issues are unlikely to be aired in the climate change talks in Copenhagen, they are of direct importance to regions who are members of the Innovation Circle. Maybe the new Transinform project could start by producing some scenarios of how changes in climate, not only in the Baltic Sea Region, but also in places far away, might begin to shape the future of these places. 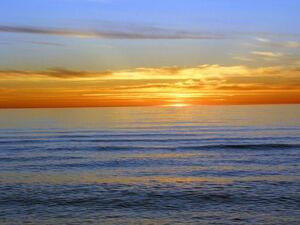