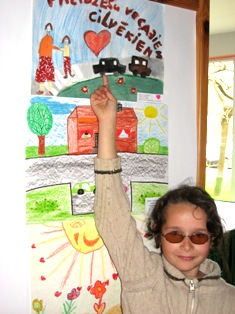 7 to 10 year’s old pupil from Jelgava district schools participate in children drawing exhibition “Charity... What can I do?” The exhibition is the good way to encourage children understanding about charity and social assistance involving also their friends and families. 70 drawings and applications were submitted for evaluation. Children in presented pictures are trying to formulate their role and possibilities to help others – children in orphanages, pets without owners, elder people and simply people who live around all of us. 20 best works selected by the jury will travel to Moldova where the opening of common exhibition with 60 best children works of all three counties involved in the project – Latvia, Moldova and UK – will take place in the November. Also one teacher from each country will participate in the exhibition in Moldova to promote the further cooperation and exchange of experience between schools.

Besides in the end of the May two experts from Jelgava District deliver lectures for politicians and employees of Cahul region municipalities in the following spheres: local government system, finances and budget as well as system of social services and social assistance in Latvia. This is first session of trainings for municipalities followed by trainings in the sphere of sustainable development, spatial planning, environment and EU issues, and trainings for NGOs led by Jelgava District Council cooperation partners from Downpatrick, UK.

The overall objective of the project is to promote democratization and sustainable development of Cahul region in Moldova. Within the project also other activities will be organized, for example, the youth forum will take place to start the dialogue, cooperation and best practice exchange between young people – next decision makers and creators of politics – from involved countries. Besides, during the project implementation the new project conceptbetween Euroregion „Saule” – which member is Jelgava District Council – and Euroregion „Lower Danube” which embraces several regions from Moldova, Ukraine and Romania will be elaborated. The Final conference will take place in the end of the project.

Total costs of the project are 73 411 EUR, 75% will be provided by European Commission. Project will be implemented in two years until 30th December 2010.

This project is part financed by the European Union. The contents of this document are the sole responsibility of Jelgava District Council and under no circumstances can be regarded as reflecting the position of the European Union.