elections in the USA by professor Cliff Hague

I guess that this week Barack Obama is the only story in town. That’s certainly the case in the UK and USA media. But in the Hague family even Obama has to take second place to another story from Chicago- the birth of our granddaughter just a day before the US election. The arrival of Isla on 3 November meant that her parents could not go down to Grant Park with their friends to be part of the huge crowd celebrating Obama’s historic victory. But like so many more in America and around the world their spirits were raised by the hopes for a new era.
“Yes we can” was Obama’s campaign slogan. At a time when fear and despondency have become the spirit of the age, Obama has dared to whistle an audacious tune. It is one that those of us who grew up in the 1950s and 60s, the cherished children of a world recovering from war, knew well. We were perhaps the most optimistic generation ever, and so the worst prepared for the dashing of our hopes. “We thought we could… but, er… it got screwed up… Sorry about that”.

No doubt Obama’s inauguration will be an extravaganza. If there were an Olympic gold medal for razzmatazz the USA would win hands-down. I also expect another inspirational speech from the new President. He does eloquence like George W. Bush does stupidity. Indeed, the Republicans targeted this as a character weakness during the campaign. They depicted the Democrat candidate as a man out of touch with “real America” because he can speak coherently and is intelligent, so is “elite”.

In case anybody doubted the difference it would make to have the USA run by somebody capable of thinking, the Republicans plucked Sarah Palin out of Alaska and put her in front of TV audiences across the globe. I will avoid any cheap asides about moose hunting. I know that many people in the Nordic lands enjoy such pastimes for reasons which, as an urban wimp, I will never understand. However, what confidence can you have in a potential US President who really believed that President Sarkozy had phoned her during a live broadcast to tell her that his wife was “hot in bed”? Luckily the Canadian comedians who so completely fooled Mrs Palin, did not pretend to be President Putin: “OK President Putin, as you say you’ve launched a nuclear strike on Alaska, and is real near Russia, I’m gonna hang up and call President Bush right now and tell him to press the button himself! That’ll teach you!”

Tackling the crisis
Of course Obama will inherit what some have called “the in-box from hell”, a set of problems that will severely test the can-do spirit that fuelled his campaign. The signs are that he won because of the economic crisis. So let’s just look at how something as humble as houses might just have changed the world. Home purchase is much more common in the US than in the Nordic countries. However, you need to borrow a lot of money to buy a house. People on low and irregular incomes are always going to be at risk when borrowing such money. Basically that is why north European countries invented social housing a century ago. They even recognised the need to public housing in the USA, but that began to change. The idea of growing low cost housing markets has also been promoted to the Baltic States as part of the process of transition.

As long as the price of houses keeps increasing, it does not matter too much if some people can no longer afford to pay back their loan. You simply sell the house and the money is there to pay off the debt. If the people then move into cheaper accommodation they might even have enough money spare from the sale to buy health care, or pay for their kids to go to College. Not only did financial institutions make money out of lending money to more people to buy more houses, but rising house prices became a kind of substitute for economic development and social welfare.

You don’t need a PhD in economics to spot the flaw. What happens when prices stop rising? Suddenly lots of people owe much more money than they are ever going to be able to pay back, even if they sell their house and everything else they own. Banks lose the money that they borrowed from other banks to loan to these unfortunate ex-home owners. The poor and the places where they live are the main victims. Detroit is America’s 11th biggest city, famous as MoTown for its music and America’s three biggest car firms. RealtTrac, a US research firm, says that half of Detroit’s home sales in 2008 have been for less than $10,000. In the year to the end of September, banks had started legal proceedings to take back 37,370 properties in the city. What do you do when you have a house that is worth almost nothing but still costs money to keep secure from people who would burn it or strip out the copper? You demolish it. That is what is happening.

I was in an inner part of Chicago in the July with a distinguished Norwegian housing academic. We were in an area where thousands of public houses had been demolished so that land could be handed over for development of cheap private houses for sale on the market. The former tenants got vouchers they could use to offset some of the cost of returning to the new houses in the place where they used to live. Few houses were being built or sold and there was lots of empty land just a couple of miles from the city centre. My Norwegian friend simply could not understand what the policy of clearance, vouchers and what we now know as “sub-prime” home purchase was meant to achieve.

Yes we can
So can we do it? “Yes we can”. An Obama administration might care to ponder how the housing policies of its predecessor played such a role in bringing about economic chaos and human misery. Obama might even look to the experience of the Nordic countries for new ideas on how to finance and provide affordable housing and to avoid the gross extremes in living conditions that typify American cities. That would be an innovation.

What other innovations could you suggest to help America’s President –elect? 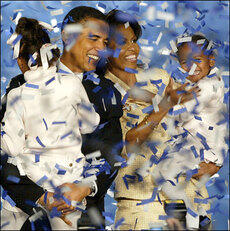