In 2010, Stockholm became the first winner of the European Green Capital Award. Since then, the city has kept up the momentum and has set an ambitious target of becoming wholly independent of fossil fuels by 2050.

With clear and effective measures towards reducing noise pollution, a protection plan setting new standards for cleaner water, an innovative integrated waste system and 95 percent of the population living less than 300 meters from green areas, Stockholm won the title. And these are just a few of the reasons why Sweden’s capital succeeded.

Now Stockholm is taking the next step. The path the City will take to attain independent of fossil fuels has been divided into short-term targets, all detailed in the Stockholm Environment Programme 2012–2015. As part of this programme, the city’s CO2 emissions are expected to be reduced by 45 percent by 2020, as indicated in the Sustainable Energy Action Plan.

To achieve all these targets, engagement with companies, businesses and citizens is necessary to change everyone’s energy consumption. To give an example, Sten Nordin, Mayor of Stockholm, highlighted the most promising sustainable energy initiatives of the Swedish city in 2012, including procurement of electric cars, the imminent implementation of the largest solar electricity installation in Sweden, as well as a plan to construct a new combined heat and power plant with bio fuels.

In addition, Stockholm has decided to collect 50 percent of food residues in household waste for biogas production. It has also made the commitment to investigate opportunities for renewable energy production on the roofs of city-owned buildings while the city’s own building stock is being energy efficient refurbished. The city administration also aims to become independent of fossil fuel by 2030 and they have already started working to achieve it.

This Sustainable Energy Action Plan was submitted to the Covenant of Mayors. The Covenant of Mayors is the mainstream European movement involving local and regional authorities, voluntarily committing to increasing energy efficiency and use of renewable energy sources on their territories. By their commitment, Covenant signatories aim to meet and exceed the European Union 20 percent CO2 reduction objective by 2020.

Currently, 4,401 European cities and towns that have signed the Covenant of Mayors commitment, all aiming to reduce their CO2 emissions by at least 20 percent by 2020, in concordance with the European Union objective.

The Covenant of Mayors is one of the jury member organisations that assess the shortlisted cities for the European Green Capital Award. Currently, the cities shortlisted for the 2015 award, Bristol, Brussels, Glasgow and Ljubljana will present their vision, action plan and communication strategy to the Jury. The winning city will be announced in the European Green Capital 2103 Nantes in June this year.

With all these initiatives Stockholm is once again showing its commitment to ongoing, ambitious goals for further environmental improvement and sustainable development, serving an excellent example for the rest of Europe. 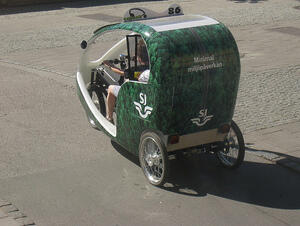