Kirkenes city is organizing Barens spektakel for the 7th time. This year it will take place 3-7 February. As always, Kirkenes city days are going to have activities connected to music, theatre, sports and many others. Some of them are very creative and some events can only take place in the arctic. In 2010 the festival will focus on the knowledge and experiences the Circumpolar Arctic offers.

What does it mean to live up in the North all year round? Is it periphery or centre? Can we develop a society that will make these regions more attractive to live in and settles down here? Who are the stakeholders in this development? We focus on how people/ indigenous people through generations have been adapting to the extreme climate conditions, which is a priceless knowledge in itself in terms of transferability to the modern society.

Barents Spektakel 2010 is arranged for the 7th year. The festival had developed as a cocktail with contemporary art, performances, literature, theatre, film, seminars and concerts as ingredients, spiced with the current issues related to the Barents Region and the High North in general.
Indoors and outdoors, on the Town Square and in the swimming pool, from a sports arena turned into a concert stage to an art exhibition in  placed in the Pedestrian street. From a gigantic snow labyrinth built for an outdoors performance where both musicians and the public search for their path, to the burnt down Malmklang that opens its doors to show a new theatre play, and to seminars with researchers, artists, businessmen and politicians, who get a chance to play a !

Kirkenes welcomes you to the Hot Arctic Kirkenes in February , 2010! ARCTIC CALLING! 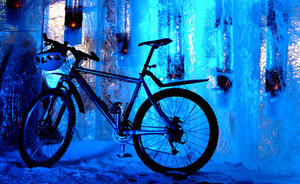