1000 euro in award to design company in Murmansk

"Council of the border municipalities of the north" launched a competition for logo at the IC website. This resulted in 25 proposals and the winner was Arctic Media Group in Murmansk. The logo is symbolising four populations cooperating for the development of the northern border area.
15 municipalities in 4 countries at the top of the world are helping each other across the borders. The council which had general meeting in November 2007 elected a new board with members from all countries. Ms. Lisbeth Isaksen from Sør-Varanger Municipality is the chairman of the board and Mr. Reijo Timperi from Inari Municipality is the chairman of the general meeting. Some of the municipalities in the north will also participate in the Transinform project. They are in particular focused at the border crossing cooperation issues. 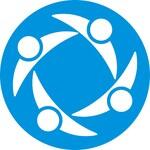