I am writing this blog in the town of Paphos in Cyprus which has recently been awarded the status of European City of Culture for 2017. This is interesting for a number of reasons. Firstly, this is a small town rather than a city. The city itself has less than 35,000 people and the district is less than twice that. Furthermore, this is a city without major concert halls, art galleries or theatres. In fact the new part of the town on the coast and around the old harbour is a creation of mass tourism. It is the kind of townscape that you see anywhere across the coasts of the Mediterranean to which sun-starved North Europeans have flocked since the 1970s. There are beachfront hotels, bars, restaurants and souvenir shops. The offer is unashamedly sun, sea, sand and a touch of hedonism. Seen from the windows of an “Irish Pub”, especially out of season, this is an unlikely City of Culture.

But there is another face to Paphos. The old town is somewhat inland on higher ground offering some protection from marauding pirates that roamed these seas centuries ago. It is a place of some character. There are also some impressive mosaics that date from 200-300 BC. This is where Aphrodite landed when she rose from the sea and her cult was strong here for hundreds of years. There’s a medieval castle, an archaeological park and it’s on UNESCO’s World Heritage List. 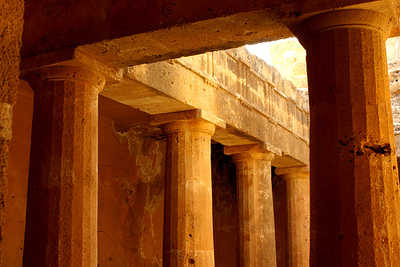 The City of Culture bid was put together by consultants working with a team of artists, citizens and local politicians. The underlying concepts drew inspiration from the successful bid made by the city of Essen, in the heart of the de-industrialised German Rhur area, another place with prospects that must have appeared unpromising at first.

The concept for the bid was the “Open Air Factory”. The idea is to bring culture right into the city – but not to build grandiose new buildings (there isn’t the money). Rather the plan is to hold events on open air sites or in existing, rather ordinary properties. In this part of Europe, with its benign climate, culture was historically an outdoor event. Civilization and culture were linked to the natural environment – sun, wind, shadows, sea, mountains, springs, beaches.

A wide range of local events are proposed, all couched within the concept of a factory. Thus for each project there are “raw materials”, a “production team” and a “product”. There are three linking themes – myth and religion; world travellers and stages for the future. Each of these allows for links to the history but also to the present. Thus amongst the World Travellers actions there will be a travelling playground that will tour the neighbourhoods and outlying villages and bring to children and adults interactive games and folk tales, which making them aware of Europe’s diverse cultures.

Of course Paphos is a very different place to those small towns and rural regions currently in the IC. However, it does show what can be achieved by local vision and ambition. There is one discordant note, with criticisms being levelled at the politicians for trying to take complete ownership of the City of Culture programme now that the accolade has been secured. There are suggestions that civil society activists are not being involved as strongly as they would like. In addition Cyprus is part of the struggling Eurozone, and its holiday visitors and ex-patriot residents may also be deterred because of the present economic situation.

It is too soon therefore to judge how successful the City of Culture experience will be. Nevertheless, for the present time IC members might like to look at the website www.pafos2017.eu for the bid and see what a successful bid can look like. Who knows, there may be scope for IC members to construct their own bid someday?