An overdose of Blues

The fourth edition of Suwałki Blues Festival will be held between the 14th and 16th of July 2011. It will definitely be celebration of blues in this part of Europe. The list of top blues musicians who performed during previous editions of the festival is long ...

CANNED HEAT (USA), TEN YEARS AFTER (UK), JOE BONAMASSA (USA), MICK TAYLOR (UK), JEREMY SPENCER (UK), SUPER CHICKAN (USA) & Spoonful Of Blues (No), DWAYNE DOPSIE & THE ZYDECO HELLRAISERS (USA), TRAMPLED UNDER FOOT (USA) and many, many others. Two big stages and three other around the city centre, club concerts, blues breakfasts, evening acoustic concerts and jam sessions at night. In addition workshops, and other events focused on blues society as well as presentations of the music gear. All of these will be parts of another edition – SUWAŁKI BLUES FESTIVAL 2011.

Over 30 groups, about 160 musicians will give concerts during the three days of the festival within various events. We believe that over a dozen thousand of listeners (including inhabitants of Suwałki, tourists from Poland as well as from abroad) will attend them. Concerts will be given by artists from the USA, Great Britain, Norway, Serbia, Belgium, France, Germany, Slovakia, Denmark, Holland, the Czech Republic, Estonia, Latvia and Poland, including such musicians as: BLUES BAND (UK) – legendary British blues formation, ANA POPOVIC BAND (SR/NL) – within the blues society known as a female incarnation of Jimi Hendrix, JULIAN SAS (NL) – one of the best-known European blues guitarists, MARTYNA JAKUBOWICZ (PL) – listeners of Polish music know her as an artist who performs ballads which are a mixture of folk, blues and classic rock, SHAKIN’ DUDI (PL) – the legendary group formed by Irek Dudek, one of the most famous and appreciated personalities of Polish blues scene, B.B. & THE BLUES SHACKS (DE) – one of the greatest European blues bands, UWANA JENKINS (USA) & THE MOJO BAND (CZ/SK) – full of energy blues-and-soul vocalist from Philadelphia accompanied by the greatest Slovakian and Czech musicians, INNES SUBIN BAND (UK) – British guitarist who worked with Robert Plant, DAVID GERALD BAND (USA/PL) – American guitarist from Detroit who derives his music form the roots of blues... and many, many others. 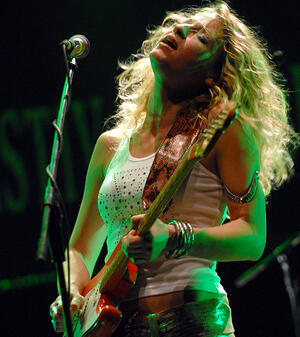