The sixth edition of European Youth Week - EYW2013 - has started and will be celebrated across Europe until the 2nd June. EYW2013 consists of a broad range of events and activities to be organised in all 33 countries participating in the EU’s Youth in Action (YiA) programme, where the coordination and organisation of events has been entrusted to the National Agencies of the YiA.

Highlighting the YiA programme is a focal point of the EYW2013. The event offers an opportunity to showcase the successful implementation of the programme, before it is succeeded by a new programme in favour of youth in 2014. The active citizenship of young people is a further theme of the EYW2013, which will also focus on the participation of young people in society and in the 2014 elections to the European Parliament.

In Brussels, Commissioner Vassiliou will host a high profile event on 31st May that will celebrate the 25th anniversary of EU youth programmes. The event will include a political debate and an awards ceremony for outstanding projects supported by the YiA programme. The debate will follow the screening of a video depicting the history and achievements of EU youth programmes and will explore the value of youth participation, both for young people themselves and in shaping communities and society at large. The event will conclude with a ceremony to present awards to outstanding YiA projects, which have been nominated by all countries participating in the programme and selected by a jury composed of representatives of EU institutions and the European Youth Forum.

A marquee showcasing outstanding YiA projects will be mounted by the European Commission on the Esplanade of the European Parliament on 30-31 May, as part of the “YO!Fest” organised by the European Youth Forum. The YO!Fest will also see the launch of the European Youth Forum campaign for a “League of Young Voters” ahead of the European Parliament elections in 2014 and will celebrate 25 years of EU youth programmes. The European Commission will also host a conference in Brussels linked to the EU’s on-going Structured Dialogue with young people and youth organisations. This conference will mark the start of a review of this unique process and will gather representatives of all the National Working Groups, who manage the participatory process in the EU’s 27 Member States. The conference will share best practice in conducting Structured Dialogue and will draw up conclusions on its future development and conduct. 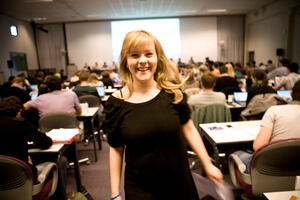