Jackson is unlike most other small towns in the mountain west of the USA. Typically these towns are little more than strips along a highway. Properties stand back from the road in plots – a gas station then maybe a hotel, a fast food place, a dentist – you drive to go about halfway along the strip, then the pattern repeats itself and soon you are out of town and can pick up speed again passing isolate homes.

In contrast, Jackson is rather like Poundsbury might have looked if Prince Charles had been raised in Wyoming. At the centre of the town is the Washington Park. It was developed in 1933 on a site that was previously used for grazing cattle. Trees were planted on the area that was already fronted by the few stores and other commercial buildings the local agricultural community. In 1941, while the streets were still dirt, the Wort Hotel opened up – a block back from the park and on the site of a former horse corral and stables. Its design was an unlikely combination of western style, using local red sandstone, and mock Tudor. It was badly damaged by fire in the 1980s, then it was restored and is now listed on the National Register of Historic Places.

Around the park and the hotel a tightly-knit grid of streets have developed making Jackson look and feel like an Old West town for affluent 21st century young professionals. There are no high rise buildings – most are two-stories, and their frontages are in a traditional “cowboy town” style – wooden and set back behind a covered boardwalk providing shelter from the summer sun. Meanwhile each of the four diagonal entrances to the park has an imposing archway constructed out of elk antlers. There’s a gunfight at 6pm on weekdays through the summer; unlike in urban America this one is staged, not spontaneous. For $6 you can also have a trot round town on the historic stagecoach.

The New West
One or two of the properties are a knowingly garish reminder of the rumbustious old days, with figures of cowboys on horses welcoming customers to the joys of a saloon or burger bar. However, these are the exception. The style and the products for sale are consciously chic and western: one of the art galleries has life-sized sculptures of local wildlife in its forecourt. I only saw a couple of empty shops.

This is “New West” designer-style. If you lived here and woke up urgently needing to buy a complete new outfit and a yoga mat, you’d easily find a shop selling them. However, if you needed a pint of milk you’d have to head to one of the gas stations on the busy highway on the edge of town.

There is a book shop that has a box of second hand books outside. Glancing over them, the title that caught my eye was “Screenwriting for Dummies”. It seemed to sum up the aspirational creative class which Jackson is targeting. Did the previous owner make it in Hollywood and decide that she/he could discard the book – or was it traded in for a copy of “Abstract Painting for Dummies”? 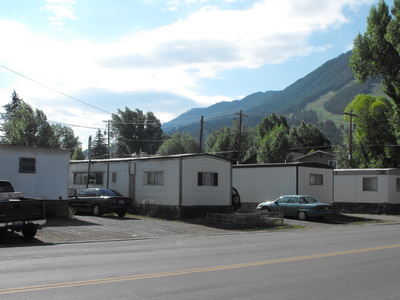 An exclusive place
Jackson is a pricy place to live. You could get a ranch for a couple of million dollars and feel that you wouldn’t have to get your hands dirty running the place. But here, as elsewhere in non-metropolitan USA, the poor live in trailers, largely out of sight. Jackson is very white. There are few Afro-Americans to be seen – indeed I cannot recall seeing any during my short stay.

The shape of people in Jackson is also different than what you see across much of the USA. In the couple of weeks I have been on my rip to this side of the Atlantic, I have grown accustomed to seeing people whose body shape is square. People on the boardwalks of Jackson are skinny, and often seem to be walking a pedigree dog.

Economic place-making
So what has been the secret of Jackson’s undoubted success? It’s a town that has clearly been planned and designed on a quite different template than others in this part of the USA: a place that European planners would much more readily take to their hearts with its walkable streets, and where drivers even stop to let pedestrians cross the road.

It would be nice to view the design as the cause of the town’s attraction – and it has surely had a part to play. However, much wider factors have been more decisive – in particular the availability of cars and air transport, and the disposable income of the better off in our societies. What Jackson has done very well is tap into that market, creating a distinctive niche with high added value. Place making is about design but also making a local economy.