“A sigh of relief”

Angela Merkel achieved a convincing parliamentary majority in a decisive vote on expanding the euro rescue fund. The Bundestag, Germany's upper legislative chamber, approved to expand the powers of the €440 billion European Financial Stability Facility (EFSF). The delegates passed the expansion of the euro backstop fund EFSF with 523 votes in favor, 85 against and three abstentions.

“Both Angela Merkel, the German chancellor, and Europe as a whole avoided disaster”, stated the British weekly newspaper “The Economist”. 315 parliamentarians from Merkel's conservatives and from her junior coalition partners, the Free Democrats, voted in favor of the EFSF expansion, the main fund for bailing out indebted euro countries.

All the 17 national parliaments in the euro zone need to approve the reforms for them to go into effect. So far, 13 members have passed the reforms. Now the Slovaks have to vote on the expansion.

"She can still do it. Not many had trusted Angela Merkel to be able to rally her own people behind her. But the head of government was able to achieve the chancellor's majority for the most important vote on the euro rescue package EFSF, and did not have to rely on the opposition. Europe can breathe easier…"

"The news went around the world that Germany, the most important country in Europe, will continue to support the euro rescue. If it is true that, in this crisis, clarity counts more than anything, then those in government headquarters, central banks, and financial institutions must be breathing a sigh of relief. The Bundestag in Berlin has spoken. But unfortunately, this sigh of relief isn't taking place, because, while the German decision is certainly helpful in the bid to solve the major crisis, it is not nearly enough." 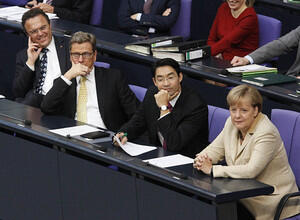