What makes a region attractive to its residents and visitors?

The idea of making your town more attractive has been central to the Trans-in-Form INTERREG project in which several IC members are partners. Now an ESPON Report from the “ATTREG” project has researched this project and published its findings. It points to the fact that some of the places that have been seen as being very successful in the recent past are now struggling to sustain their success.

Problems of success
Many capital cities such as Inner London, Paris, Berlin, Stockholm, and some other major economic hubs of Europe like Bavaria and the region of Frankfurt, may have become so attractive that they have reached some sort of “threshold”.  Even if they continue to suck in young workers, they are experience problems retaining the older age groups. This could be due to a declining urban quality and high housing prices.

While the financial vultures circle over Spain, it is worth remembering that the parts of the Spanish coast that were so attractive before 2007 now have something like 1 million empty new houses. I can hear the ghost of Marx muttering something about “crises of over-production”.

Doubts about the “Creative Class” argument
While tourism can be a fickle industry, you would think that the places most attractive to migrants would be those cities where GDP is highest and employers are finding it difficult to fill posts with skilled workers. However, if you look at the data across Europe, this is not quite the picture that emerges.

The American pundit Richard Florida made his global reputation with the concept of the “creative class”. Basically he argued that to thrive in today’s knowledge economy, cities need to retain and attract talented, creative people – poets and professors, artists and architects, designers and doctors.  To do this they need to be tolerant places and places of quality with culture and design. It was a thesis that in the boom years unleashed a tidal wave of urban design-led regeneration projects. As our book Regional and Local Economic Development showed, these often displaced local residents and businesses.

There was always a “chicken-and-egg” question here. Which came first? Did the creative people kick start the high-tech’ and knowledge growth? Or were they attracted to places that already were strong knowledge centres – typically places with major research-led universities and colleges?  Was the draw the pay cheque, not the coffee shop? Incidentally those serving the creative beings in the coffee shops are typically very low paid. The economic success of places – their leading role in the knowledge economy – comes from the human capital produced and reproduced in their institutions.

Crucial role for higher education
On this basis, investment in higher education facilities becomes a key driver for growth. This theme is supported in ATTREG, which highlights the case of Cornwall in England, where six universities and colleges have formed a partnership called Combined Universities in Cornwall (CUC).

The aim of CUC was not just to strengthen links between these educational bodies, but also to improve their collective connections with employers in the region. CUC set up a special team to build links with the business community and especially with those in the knowledge-based sectors. In addition CUC created an incubator and innovation centres close to the CUC campuses. Among the sectors targeted is marine renewable energy.

CUC was able to benefit from EU funds, as Cornwall has been a low-GDP per head region. It is a peripheral region that had lacked university-level educational institutions. There is evidence that CUC has had success in reversing the traditional net out-migration of able young people from the region.  Just as important the aim is to create a synergy between education, research, knowledge transfer and business incubation and regional economic development.

Assets, strengths and audiences
The messages from the ATTREG project are that a region must look at its assets and identify what its special strengths are. They also need to think about who are their main audience or customers?

The evidence seems to be that younger age groups move to more “urban” regions. However, the middle-aged seem to favour culture-rich regions. By contrast, higher net migration flows for older working age adults are associated with regions with a lower population density. For some regions, especially those on the coast or in areas of high landscape value, “silver migration” may be the most viable development strategy to pursue.

When it comes to attraction, gender matters
Gender also needs to be considered when formulating a strategy to retain and attract residents. Another ESPON project (already features on the IC website) called SEMIGRA explores this theme.  The project focuses on the out-migration of young women from peripheral rural regions, and its impacts on territorial cohesion.

While there are some pan-European trends in the regional pattern of sex ratio imbalances, there are also many differences and national peculiarities, linked to labour markets and cultures. A crucial aim of the SEMIGRA project was to incorporate the perspective of young women into regional planning strategies. The conclusion was that regions seeking to retain or attract back young women also need to be able to offer a suitable range of jobs for their male partners.

Urban design is secondary
In short, it is important to recognise the social and economic forces that structure the attractiveness of places for different populations. Research on such factors is an essential platform for creating an effective strategy. Urban design may have a part to play, but it is a secondary one. 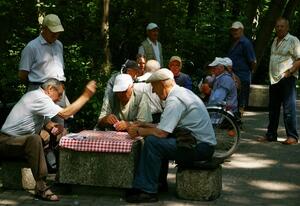