Neil Adam, Senior Lecturer in Spatial Planning at London South Bank University (LSBU), UK, was one of the attendees at the TiF workshop “How to link regional scenarios and new narratives” in Riga. His main interests are European spatial planning at the supra-national, national and regional level. ICN talked with him about European projects and the potential of the Innovation Circle Network.

Neil Adams worked a lot in the Baltic States when he was a consultant based in Belgium for many years. He has extensive experience of regional development and spatial planning at national, regional and local levels in the Baltic States. Adams has been back in the UK and worked at LSBU since 2005. Currently he is also doing some consultancy work for the World Bank advising them about the regional development strategy for the Lubelskie Region of Poland. In the coming two to three months he will be giving papers at conferences in Latvia again and also in Germany.

How did you hear about ICN?

During the research we were examining responses from various groups to the European Commission’s Green Paper on Territorial Cohesion and we were particularly interested in networks with participants from the Baltic States. The response from the Innovation Circle Network was an obvious one to choose due to the participation of Latvian and Lithuanian partners. I spoke to Cliff Hague who has been involved with ICN. Bjorn Frode Moen, coordinator of Notodden Municipality, is also involved in the PURR project, so we saw it as an ideal opportunity to develop some synergies between the two projects. Too often EU projects continue in isolation and I strongly believe it is always useful to try to seek synergies between projects.

What in your eyes is special about the Innovation Circle Network?

ICN is particularly interesting as it is a network that has continued beyond the life of one project. Many networks disband once a project has finished but ICN has continued as a flexible network with some partners then participating in further projects, first PIPE then ICN and now Trans in Form. I believe that such flexible networks are extremely valuable as a means of generating knowledge and contributing to debates about regional development and spatial planning. The members of the networks may change as different personalities come and go or different partner organisations have different priorities but this adds to the vitality of the network and helps to stimulate creativity with the emergence of new partners and people and therefore new challenges and new ideas. The partners therefore clearly benefit from this exposure to new ideas and it helps them to think about old problems in new and different ways.

Where do you see more potential for ICN?

I hope that ICN continues to be active once Trans in Form has finished and goes on to participate in other projects. In this way ICN will continue to engage with and contribute to important European debates and generate knowledge that will benefit small towns and rural areas in different parts of Europe. I hope to have the opportunity to be involved with ICN in the future.

That is a very difficult question! In some ways referring to the Baltic Lake diminishes the importance of the Baltic Sea to many of the countries situated around it. However, I think discussions like this are always important, so in that sense I think that it is useful as it gets people to think in a different way about territory and space. People's mind processes can become static and this can restrict creativity and stop people thinking outside the box. So it does not matter whether people agree or disagree with references to a Baltic Lake rather than the Baltic Sea, it stimulates discussion and debate.
In reality the challenges we are facing today do not restrict themselves within neat borders and many actors are active in different knowledge arenas at different spatial scales and in different contexts. I strongly support many of the initiatives undertaken in the context of the Baltic Sea Region and feel that they retain their value even if people talk about other levels or spaces. The geo-political characteristics of the wider region mean that high level politics and relations will remain crucially important. However, actors at the lower levels can still make a valuable contribution to breaking down certain barriers and to policy development and practice by sharing experiences and mutual learning in ongoing and emerging co-operation initiatives. We may be able to do little to influence high level international politics but lower level initiatives can provide effective arenas within which common challenges and appropriate solutions can be discussed and debated. The most important thing as far as I am concerned is that statements like this are valuable as they generate discussion and debate and get people to think about old problems in new ways, to think outside the box and this potentially stimulates creativity.

Last year Neil Adams published together with Giancarlo Cotella and Richard Nunes the book: “Territorial Development, Cohesion and Spatial Planning - Knowledge and policy development in an enlarged EU”. Right now he is working on a paper that deals with the dramatic spatial development trends that have contributed to a unique territorial governance landscape among the Baltic States. The paper argues that the ability of diverse communities of actors to influence stability and change in the policy development process is possible only after having acquired the powers to shape or frame new ‘policy images’.”

Foto: Neil Adams at the TiF workshop “How to link regional scenarios and new narratives” in Riga 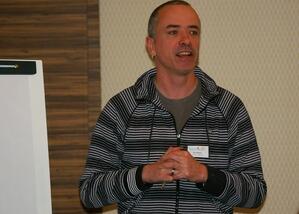